He tweaks my nipple and I want him.

He left to play golf many many miles away.

I want a facefucking in the worst way.

I want to be used, abused and taken.

I want his cock deep inside me.

I want his fingers down my throat as he fucks me sore.

I want to be on my knees for him.

I am back to work after a long and eventful weekend with Mr. D.  I will fill you in on all the fun details soon.  For the moment I just wanted to share that I’m here and well.

Darned near everything on my body is sore from the weekend’s events.  That means I had fun, right?  Right!

Oh, my queendom for a nap and a massage. Drinking on Sunday, I’ve got to ban that practice from the options menu.  Ugh.  I’m not much of a drinker so double ugh.

Oh well, the day will eventually end.  6 hours and counting.

After coming into the house, the same night we enjoyed the front yard, Mr. D told me that we would use the spanking bench tonight. We rarely get to have this kind of play because he has roommates. They are kink friendly but not part of our play. So, we can only play when they aren’t home.
Mr. D gave me a gift. He has started learning how to craft leather. One of his first projects was to make me a hair restraint. It is a leather sheath with snaps up the length of it. It encases my hair and holds it out of the way while we’re playing. Here is a picture of it in my hair and by itself. It is similar to the restraints that bikers with long hair wear when they ride. I love it. He put it in my hair before we began to play to keep it out of the way. Since I don’t have a collar, the leather you see around my neck was a combination of the two straps of a ball gag and a chain cock ring that held the two pieces together.  It sounds odd but it worked great.  I was truly shocked he put a collar on me and it felt amazing.  You can see part of it in the picture, that’s why it is so long. 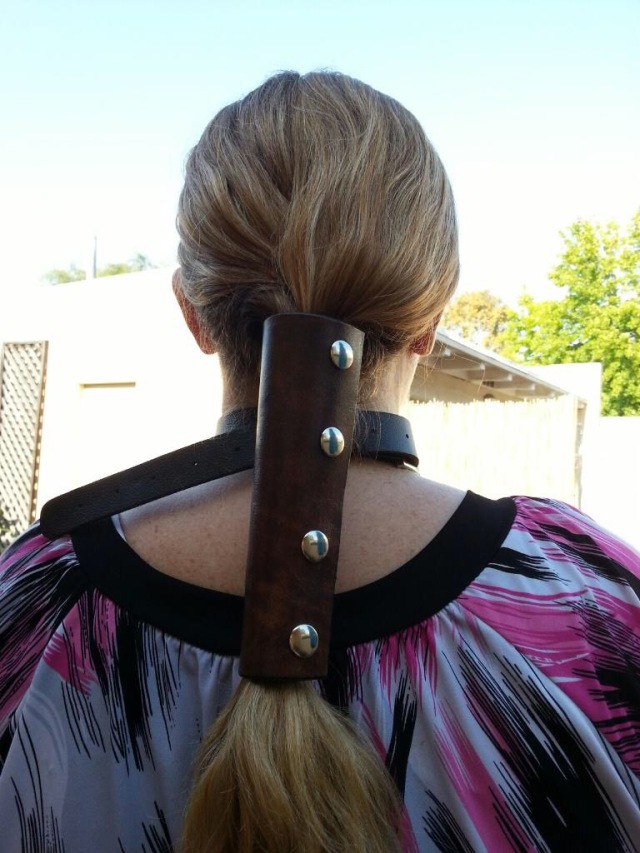 He pulled out the bench and moved the furniture so that it was in the center of the living room. He brought out his rope which is cut in long lengths. He also placed the safety scissors out. When playing with rope, he is always prepared. I feel completely safe and trust him implicitly when we play. I stood at the bench in the nude as he was preparing.

“Setting the scene,” he said, “it takes time. Up on the bench my Love.” Ropes in hand, he watched me as I mounted the bench. I have provided a picture here so you know the structure of it.

He had me kneel on the lower step and lay my body across the upper platform. My breasts were pressed to the cushion under me, my arms hung down each side and my head was free to hang over the edge or lift up and look around a little. He picked up my wrist and looped the rope around my arm until he had a manacle arranged just above my wrist. Then he tied the other end to the brace of the bench. He continued to the other side and tied another manacle above my wrist on the other arm.

“We’ll put this one higher on your arm to protect your wrist. Let me know if you have any issues with this side.” He knows I have rheumatoid arthritis and this particular wrist had been acting up recently. He’s a careful Dom and he knows it’s important to take care of his submissive. We practice a lifestyle that skirts the edge but we still know that being safe is necessary. This way we’ll be able to play no matter what physical issues arise. He tied the other end of the rope to the side of the bench. I was immobilized and presented for his pleasure.

He stood behind me admiring his handiwork.  I felt his hand caress my back and cooed at the delicate sensations his fingers brought to life.  He came around the side until I could see him.  I lifted my head to look at him. “Everything good?  Everything feel okay Baby?”

“Yes Daddy.  Perfect.” He had checked in and I was aching to feel what he had planned.  He ran his hands over my arms, my back, my buttocks and my thighs.  His touch awakened my skin and brought me to life.  The sensations were intoxicating.  I love feeling his hands on me. His touch increased in pressure.  He pressed into my body.  I felt his heat and knew he was preparing me, lulling my mind for what was to come.

He began with the stingy cane.  Before he wielded a cane on me the first time I feared them.  Still, there is a trepidation and a healthy respect for the cane and the wielder but I no longer run from it.  He has shown me how it can be used for warming up the skin.  He uses gentle taps and never hits the same location until the sting is gone and that area craves attention again.  The cane made me itch for him to begin in earnest.  The tap, tap, tap was making me aware of an inherent vibration inside me.  I was rejoicing that he was doing this and eager for more intensity, more of it all.

When I felt the first thud of the flogger I sighed with pure joy.  I ache for his flogging when he hasn’t done it in a while.  I want to feel it on me constantly.  He began with long slow thuds of the falls across my back, on my ass and on my thighs.  He moved the falls across my skin with a rhythmic cadence. At some point during his ministrations I felt a blanket resting across my calves and feet.  How amazing that he understood how much this would comfort me.  I relaxed even further.  When the body is experiencing any sensation play it’s easy to get cold or jittery from the rush of blood to the surface of the skin.

He took a break from flogging and I felt a soft ticklishness cross my skin.  It was the feather duster I gave him.  It has pristine white feathers and a black handle with a black lace decoration.  A joke between us and not a duster to be used to actually dust.  Maybe…we’ll see if he decides I truly need to dust his home with it.  I purred and moaned in unison.  I’m such a sensation slut.  He brings it out in me with all that he does to me.  He came around to my face so that I could see the duster.  As I smiled up at him, he freed his cock and pushed it up to my mouth.  I struggled against my restraints to reach him.  My lips strained to capture the head of his cock in my mouth.  I darted my tongue out, desperate to reach him.  He pushed up against me but still I could only suck the tip.  What a tease that was.  I wanted him deep in my mouth.  I wanted him to fuck my face but it was not to be.

He pulled away from me and went back around to the side of me.  He still had the duster in hand.  Something more than tickling was on his mind now.  His hand grabbed the collar from the back of my neck. His breath warmed my ear.  “You’re mine, you hear me? My slut. I think I’m changing my mind about the collar.  I like this a lot. Yes, I do.”  He pulled on the collar and it choked me.  His hand rubbed across my ass.  He pulled up and I felt his fingers push inside my sex.  The ache for that had been building.  My body opened to him.  I moaned and thrashed on the bench eager to push back on his hand.  He pumped me and I cried out in ecstasy. The next thing I felt was something very hard up against my tight puckered asshole.  My mind grasped at what it could be.  The handle of the duster!  He pushed it up into the tender skin of my opening and I cried out.  It bit and it felt like needles being pushed into me. Being a prop, the handle was plastic and not well polished.  The little bits of plastic from its manufacture were biting my most tender spot.  “Well, that didn’t go as planned.  We’ll try something else.”  I love that he’s creative and yet flexible when things don’t go as planned.

He checked in with me to make sure I was okay and then I heard him take a drink.  He came around and gave me some water.  He began again.  The flogger warmed me once more and then he used something new.  He made a leather strap recently and hadn’t used it fully until now.  Here is a picture of it.  It is made out of Buffalo hide and is quite stingy.

My body was warmed up, my skin must have had a blush to it because I felt warm all over my thighs, ass and back.  He kissed my ass with the strap and I cried out.  It hurt and was stingy as hell.  I squirmed but told myself to hold still.  I wanted to take it all.  I wanted him to be proud of me and I wanted to endure all I could.  I calmed my mind and let my body loosen on the bench.  When I would normally clench, I let go.  The strap kissed my ass more and more deeply.  I heard the thwacking sound fill the room.  I breathed deep and just as I was about to cry out the pain morphed into hot pleasure.  I felt myself float and the pain and warmth buoyed me up.  I wanted it all, I took it all, I moaned in the purity of the pain.  This is what I wanted, what I ached for.  As I drifted, he told me to open my legs and he strapped my outer pussy folds.  I cried out and still he came on.  The strap bit my ass and my cheeks burned.

Just as suddenly as the sub space came it went.  Even as he continued to strap my ass, it began to sting and he noticed the change in my reactions.  He stopped and untied me then.  “Stay there and catch your breath, when you’re ready, rise slowly from the bench.” As I rose, his hands steadied me.

“You knew when I left and when I came back.” I was amazed at how he knew so well my state of mind.

“Yes.” He said.  “I was surprised it didn’t last longer and that you came back so fast.”

“How long was I on the bench? It didn’t feel very long to me.”

“You were there an hour and seven minutes.” He said. I was surprised.  Even though I was only in sub space for a short time, the whole experience seemed to pass by so swiftly.  Probably because I love it all and want it all and I just want it to continue forever.  I’m a happy girl that he takes the time and wants to do such things to me.  I loved every minute.