Time to go back home to my responsibilities. I have had another beautiful and perfect weekend with Daddy and Master.  I call him both now for he has become two.  More than that really.  He is my everything.  My husband-to-be, my muse though he calls me his, my protective Daddy and my stern Master.

I have not admitted this and granted I’m realizing this as I write it but I need challenge, I need struggle, I can become distracted and bored with less.  My mind is ever active, ever working and ever analyzing.  Daddy and I are more alike in this than I knew.

He fits me so well.  He told me tonight that I fit him like a glove.  He’s so right. Our bodies fit together but moreso than that, our minds fit together.  He challenges me.  He is relentless in exploring our chemistry.  He finds his way inside my mind, centering my passion, delving to the depths of all that is me.  He worked his way in, he broke the fortress I had become.  With his kind heart, his reprobate swagger, and his force of will all governed by his engineer’s mind he took me and made me his.

How do I go home tomorrow?  How do I part myself from him when I am so cleaved to him that I feel half a person?  All I want is to shut the world out and live in a dream of service to this man. I want to allow him to debase me, lay me bare, then raise me up from the ashes he created to build me again in the image he sees. 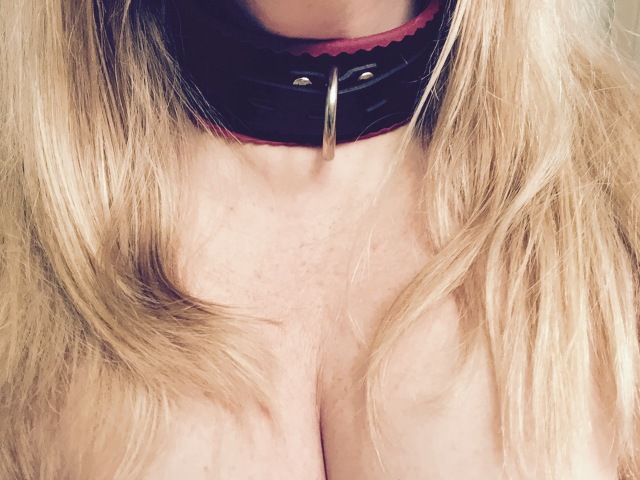 He stole my heart so soon after he took my body.  Now he owns it all completely.  I am his.  His girl, his submissive, his slut, his fuck toy and now his slave.

I am his possession and his property forever. 😊

The day before Thanksgiving I was with Mr. D. We were having sex and he was using the Wand on my clit. It was wedged between us and vibrating me towards an orgasm. For some reason, it was working but not sending me over the edge.

Possibly it was because we had done this the night before and I could feel the spot on my body where the device had ground a sore spot into my pelvic bone. Whatever the reason, I wasn’t going over the edge.

The orgasm rocketed through my body and my pelvic muscles squeezed him tightly. I convulsed under him and felt rather than saw his approval. I was so happy to please him. I was surprised and overjoyed really that his command was what triggered me to orgasm. I want him to own my pleasure. I want it to be His. His to give and His to command.

You are on alert…. tomorrow come prepared… cause I am taking you. I am taking all of you and you will do as I say when I say. Tomorrow I take back what is mine.

Good night love. I am thinking of you and I am in need. Heated. Blood boiling. Cock erect. You are Muse. You are mine. Sleep well.
This came to me in text the night before last.  He put me on notice.  He would take what was His.  Thanksgiving approaching, child to care for, work to do, nothing could break the constant thought of Him on my mind.

Friday afternoon was organized chaos. I was prepared but I had a lot to do before I was ready to leave. I had presents purchased, not wrapped. I had food ready but cookies to bake. I had child in tow but not dropped off yet. I wanted to be on time. I’m really working on not overdoing things and being places exactly when I say I will, especially for Mr. D. I wanted to show him how much I love him and honor him for our first anniversary. Rush, do, rush, pack the car, rush, drop the child and on the road on time….whoop! Awesome!

I was so excited about the plans I made for us to have a picnic and go see a comedian on Saturday. I had every detail planned. I wanted everything to be smooth and relaxed. Big public venues can be stressful so I tried to mitigate that as much as possible.

When I arrived, Mr. D kissed me and said we had dinner plans. He took us to Inka Mama’s for Peruvian food, yummy. Then we came home and had presents. Mr. D gave me my poem and a beautiful Steam Punk corset and flask. It’s my first flask. I’m excited for us to go do something Steam Punk-oriented now that I have all the fun stuff to outfit myself. I gave him a cigar travel carrier with some of his favorite cigars, two canes, and a feather duster. If you recall the conversation at our friends’ about the maid service, this last gift was a little joke on my part.

Then he took out the cane and used it very lightly on my ass and thighs. He was letting me get used to it. I heard how stingy canes were for so many years, I had a built up scare factor. He went really easy on me for the first time. Then he took his time and caressed my whole body with his hands and gave me a beautiful flogging. I love the skill he uses and the way he builds the flogging pressure over the session. He warmed my whole body with thuddy strikes and then rhythmically peppered me with more stingy hits on my back, ass and thighs. I could honestly have him do this all day. I’m so addicted to that feeling. I always want more.

As I was basking in the sensations of the flogging his fingers began to probe my backside.  “Daddy, can I go to the bathroom?”

“No, not right now.” He pushed his fingers inside my ass until my body responded to him.  He alternated between my pussy and my ass, filling each hole.  It felt more intense because my bladder was full. Then he used the cane to smack back and forth between my thighs.  It surprised me more than anything.  I expect he knew it wouldn’t hurt because there was no wind up on a short little stroke like that.  But when he pummeled my holes with his fingers rapidly, that was different.  The speed and the intensity was astonishing.  Rapid fire fucking by his hands forced me to grab the bed and hold on while my moaning filled the room. The sensation was doubled because I had to pee! Finally he stopped.

His hand gripped my hair and pulled me up off the bed. “You have three minutes, understand? Don’t make me wait.” I took a deep breathe and went. The way he talks to me in those moments just sets me on fire.  Just incinerate me from the feet up!

When I returned he positioned me on my back and mounted me. He looked down at me, looked from my eyes to my breasts. “Hold them up.” I know what I’m supposed to do. I’m supposed to push them together and up towards him. I’m to move my fingers out of his way.  And I also know what’s coming.  God, I hate it and I love it. He smacks my tits so hard and it is so stingy. I just want to cry out and plead for him to stop.  This time I didn’t. I just cringed and held my breath.  The smacks came and I whimpered.

“I don’t know how you do that.” He said between thrusts and smacks.

“I hit here and then you flood down there. Every time.”

He hit and thrust and then fucked me so hard and fast it left us both completely breathless.